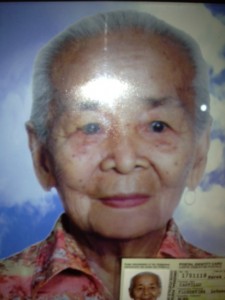 Deepest condolences to the Castillo clan as another Sagunto elder passes on. Rest in peace, lola Tinang.

We would like to extend our deepest sympathy and condolence to the Castillo family who mourn the passing of a beloved husband, father, brother and friend.

His two sons are still in the Philippines awaiting visas to be able to attend their father’s funeral service. His sister, Tessie Alboukharey from London England, has already joined the family in Vancouver. Mr. Felimon La Madrid Castillo was preceded in death by his parents, Mr. Ricardo and Feliza Castillo, and siblings Luz and Wilma. Surviving siblings in the Philippines: Pacita, Harry, Flora, Arsenia, Tessie, and a host of relatives and friends collectively mourn the passing of their brother, uncle and friend.

Viewing and visitation is scheduled this evening, August 26th from 5-9 p.m. at the Hamilton Funeral Home, Vancouver, BC.

We bid a beloved Aunt goodbye as she joined her maker on October 14, 2009. Emma Castillo Espacio was a loving wife, mother, grandmother, sister, and loved by many relatives and friends. Her laughter and her brilliant smile will be missed.